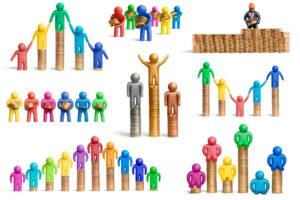 If you operate as an S corporation, you already know that you need to set a salary for shareholder-employees. A reasonable one.

And you hear lots of rules of thumb (including some at this website).

And then people talk… you know, about what you can really do. (Hey. We’ve all heard the stories…)

Which is why it’s useful and interesting to sift through actual IRS S corporation salary data. So I want to do that here.

A Quick Review of the Basic Rule

Before we start that sifting, though, let’s recognize and restate the basic rule for setting S corporation shareholder-employee salaries.

That basic rule goes like this: You need to set a salary that some other firm would pay someone for doing similar work.

Furthermore, here’s another good idea. It’s always wise and smart to dig up some real salary survey data for your area for jobs like you’re looking at. (We particularly like Bureau of Labor Statistics data which you can get to from here.)

So keep that in mind as you continue reading. And now let’s look at the data.

Let me quickly describe the table’s data so no confusion exists. We can do this by talking about the first row.

Row one in the table reports on the average revenue, officer salary deduction and net profit considering all 4.7 million S corporations.

Make sure you understand those numbers: On average, an S corporation generates roughly $1.7 million of revenue, deducts $62,046 of salaries expense for all its officers, and reports just over $100,000 of net income.

Tip: Remember too to mentally adjust the numbers for inflation that’s occured since 2017.

And then reading down the rows of the able, look at the other averages for the industry categories listed: mining, construction, manufacturing and so on.

You can probably glean some insights from this information. But you’ll want to keep in mind a few facts.

The S Corporation Salaries Number is the Deduction

A first thing to note, for example, the S corporation salaries value the IRS data lets you calculate? The value represents the average deduction.

So, that $62,046 average just referenced? That’s the average deduction for officer compensation. The amount might represent one officer making $62,046. Or two officers making $31,023. Or three officers making–well, I don’t need to go on. You see how this works.

A quick related note: An officer isn’t necessarily a shareholder.

Now most of the officer compensation deduction probably does go to shareholder-employees. But maybe not all.

In any case, that’s something else to keep in mind.

The reality to recognize about mean averages? A mean value probably exceeds by a large amount the median, or midpoint, value.

For example, suppose you or I calculate the mean and the median of the following ten officer compensation deductions:

The median, or midpoint, officer deduction equals $40,000 in this case.

The mean, or average, officer deduction in this case, however, equals $60,000.

You see what happens with the mean average. That big number–the $300,000–pulls up the average.

An Example of How to Use the Salaries Data

Given all of the above, then, how might you use this data?

Well, you can probably use the average officer deduction values as a benchmark for setting S corporation shareholder salaries for average-sized businesses within a category.

As an example, look at the the average S corporation that operates within the  “professional, scientific and technical services” category.

On average, firms within that category of S corporations per the table report revenues of just over $800,000. The officer compensation deduction equals about $72,000. And then the business profit roughly equals $92,000.

Again, remember that $70,000 represents a deduction amount–not a salary amount. Also it’s a mean not a median. Finally, it might represent not just shareholder-employees but non-shareholder officers. So don’t forget that.

Nevertheless, even given these factors, the value probably provides a pretty reasonable benchmark to consider when setting a salary for a firm in the same industry category.

One final quick comment. In the past, the IRS published statistics that allowed for building a much longer list of average revenues, officer compensation and net profit by industry.

If you’re interested in a longer list, therefore, you may want to make the calculations yourself using some earlier years’ datasets. (We did calculate and show that longer dataset for 2013 at our S corporations Explained website. You may want to peek there.)

Firms wrestling with trading off Section 199A deductions with S corporation payroll tax savings may be interested in this discussion: S Corporation Sharehold Salaries adn the Section 199A Deduction

Concerned about IRS short-term rental audits? Hey, you're not crazy to worry if you own a vacation rental. Short-term rentals often shelter lots of … END_OF_DOCUMENT_TOKEN_TO_BE_REPLACED

Long ago, there was no tax code that differentiated ordinary income from passive income or ordinary losses from passive losses. Life was good for … END_OF_DOCUMENT_TOKEN_TO_BE_REPLACED