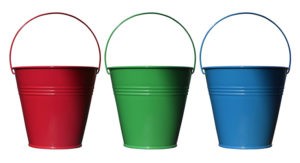 Thinking in terms of income tax buckets makes a lot more sense. And it gives you an easy handle on the math.

You can, in fact, use the concept of income tax buckets to think about standard and itemized deductions, personal exemptions, and then all of the tax rates. And even to see how some people pay zero income taxes. But I’m getting ahead of myself.

What do these deductions mean? They’re income tax buckets. And whatever otherwise taxable income you “pour” into the bucket doesn’t get taxed.

For example, if you’re single, you can “pour” up to $6,300 of income into your standard deduction income tax bucket and escape from paying income taxes.

And if you happen to be married and file as a couple, you can pour up to $12,600 of income into your standard deduction income tax bucket.

A tangential aside: Most people don’t itemize their tax deductions, but you can total up the amounts you spend on things like mortgage interest, property taxes, state income taxes and charitable contributions and use this total in place of your standard deduction. This approach in effect gives you an itemized deductions income tax bucket.

To keep the math easy, suppose you have a single person—you—in your family. In this case, you can pour $4,050 of otherwise taxable income into this income tax bucket and thereby escape tax.

So here’s the way to think about this income tax bracket as a bucket.

And now a weird little anomaly: When you talk income tax rate brackets, long-term capital gains and qualified dividends gets taxed not at the normal income tax rate but at a discounted rate.

The first two income tax rate brackets tax almost all income at 10% and 15%, for example. But if you pour long-term capital gain or qualified dividends into either of these buckets, the rate equals 0%.

For example, let’s say you have two jobs—one where you earn $6,300 and one where you earn $4,050. Let’s also say that you receive $9,275 of dividends from a corporation that’s paid income taxes on its profits. (This is what creates a qualified dividend.)

Notice something subtle happening here: Tax accounting rules pour your income into your income tax buckets in a way that minimizes your taxes. For example, in the preceding paragraph, the W-2 chunks of income get poured into the buckets where that income is taxed zero.

The table below gives you the various income tax buckets for the married filing joint status and lets you see what happens when your income gets subjected to multiple tax rates.

You don’t need to memorize the numbers. You just want to know this conceptual point: You fill up these income tax buckets one by one, starting with the lowest rate buckets.

Let’s say, for example, that you are married and that between you and your spouse, you have one $28,800 W-2 that you “pour” out into a $12,600 standard deduction bucket and then four $4,050 personal exemption buckets.

You see what happens, right? Only a few “drops” of income get subjected to the higher percentage rate.

Can a make a brief digression? When you use the income tax buckets concept, you see clearly how some people avoid paying income taxes in retirement.

Suppose a married couple receives $20,700 in taxable pension benefits. Maybe this is their taxable Social Security. That $20,700 might get poured into the $12,600 standard deduction bucket and then a couple of $4,050 personal exemption buckets. As result, no income tax gets paid on that income.

Finally suppose that the couple also receives $56,750 in qualified dividends and long-term capital gains from another mutual fund it owns. That income would be poured into the 15% income tax bucket, but oddly it also gets taxed at 0%.

Hopefully, you can use the concept of income tax buckets to better understand how your taxes get calculated. But you want to be alert to a handful of additional complexities.

First, tax law does give some tax payers special additional income tax buckets. If you work overseas, for example, you can get a special income tax bucket, called the foreign earned income exclusion bucket, that lets you avoid paying US income taxes on income you earn outside the country.

Third, and finally, the net investment income tax (also known as the Obamacare tax) and then the alternative minimum tax (also known by the acronym AMT) use their own separate “income tax bucket” systems. Fortunately, most income taxpayers don’t have to worry about these other taxes.

Other Related Blog Posts You May Enjoy

Real Estate versus IRA and 401(k) Accounts, Part I

Why You Don’t Need to Worry about Taxes in Retirement

Your CPA versus TurboTax