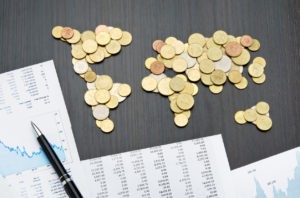 This blog post highlights the key changes in international tax laws under the Tax Cuts and Jobs Act.

I highlight four provisions which I think will have the most impact on small multinational businesses and I also provide a quick summary of the remaining changes.

IRC Section 245A allows a US corporate shareholder to receive a 100% dividend received deduction for dividends received from a foreign corporation.

As you can see from the requirements, only corporate shareholders benefit from the 100% dividend received deduction. Individuals, partnerships, and S-Corporations don’t.

Note: Small businesses ownerships often include individuals or flow-through entities as shareholders of foreign corporations.  These types of shareholders do miss the benefit of the participation exemption.

As a way to transition to the participation exemption system, IRC Section 965 requires the recognition of income, as subpart F income, for all undistributed earnings of a foreign corporation.

This provision applies to the last taxable year “which begins before January 1, 2018”, which therefore includes foreign corporations with 12/31/2017 year-ends.

If a US shareholder of a foreign corporation files a calendar year tax return ending 12/31/2017, for example, the transition tax applies to the US shareholder’s tax return due April 17, 2018.

The transition tax applies to a US shareholder of a specified foreign corporation (“SFC”).

A US shareholder includes domestic corporations, partnerships, and individuals that own directly, indirectly, or constructively more than 10% vote or value of the foreign corporation.

As you can see, the transition tax can apply to minority individual US shareholders of CFCs.   Therefore, it is important to review your existing business structure to assess the potential impact of the transition tax on the 2017 tax return.

If you are a CPA, additional budget should be incorporated to the tax return to factor in:

The Tax Cuts and Jobs Act introduces a new form of subpart F income:  Global Intangible Low-Taxed Income, or GILTI.  The term “intangible” can be misleading, as the scope of GILTI covers a broad spectrum of income.

In general, IRC Section 951A requires a US shareholder of any CFC to include GILTI in the shareholder’s gross income during the current year.

In contrast to the Section 245A dividends received deduction discussed in the first paragraphs of this post, GILTI applies to all US shareholders.  Therefore, an individual US shareholder in a CFC may be subject to GILTI.

Furthermore, since GILTI is a form of subpart F income, GILTI will be taxed at the individual shareholder’s ordinary tax rate.   Note, however, an individual may make an election under Section 962 to be treated as a corporation for subpart F purposes.

I expect most CFCs that are operating in the consulting and IT industries to be impacted by GILTI due to the minimal amount of fixed assets required to operate the business (i.e. minimal net deemed tangible income return).

Therefore, tax planning conversations should include the potential US tax impact of the CFC’s operations on going forward and should explore ways to eliminate or minimize GILTI (i.e. making a check-the-box election).   In addition, GILTI should also be considered when calculating estimated tax payments. 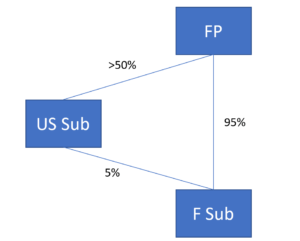 Prior to the TCJA, F Sub likely went unnoticed during US Sub tax preparation.  F Sub now plays a more vital role as US Sub needs to consider whether GILTI, the transition tax, and subpart F income from F Sub impact US Sub’s US tax liability.

The repeal of IRC Section 958(b)(4) impacts inbound businesses, too.  I recommend reviewing existing structures to see if any of the US shareholders who own a minority stake in a foreign corporation can potentially be exposed to subpart F, GILTI, and the transition tax.

With regard to the Subpart F rules, the new law repeals the foreign base company oil-related income rule. Furthermore, the US Shareholder definition now includes 10% vote OR value (previously it was only vote). And the new law eliminates the 30-day minimum holding period for CFC.

The new law creates BEAT, an acronym for “Based Erosion and Anti-abuse Tax.” This tax applies to corporations with average annual gross receipts of at least $500 million for the three-year period ending.  This tax prevents US corporations from making deductible payments to foreign affiliates.

With regard to the foreign tax credit, the law repeals the Section 902 indirect credit. It creates a new separate basket for foreign branch income. And it changes the sourcing rules from sales of inventory. (Income from the sale of inventory produced partly in, and partly outside of the US, must be sourced based on where the inventory was produced, thus eliminating the 50/50 rule.) 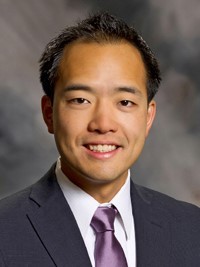 Moses Man is the CEO of M Squared Tax PLLC which helps individuals and small businesses navigate the complexity of US international tax laws and provides international tax consulting services to CPA firms across the Pacific Northwest.

A practicing CPA and adjunct tax professor at Seattle University and the University of Washington, Moses also currently serves as a board member at the Washington Society of Certified Public Accountants.

Primer on the FBAR and FATCA Rules & Penalties

Do You Have a Foreign Trust to Report?

I’ve been coaching some new CPA firm owners about how to build a profitable professional services firm. And to jump to the punchline? The twin tricks … END_OF_DOCUMENT_TOKEN_TO_BE_REPLACED

I wrote a post a few weeks ago about all of the great benefits of Section 1202 Qualified Small Business Stock (QSBS).   But frankly? It would be … END_OF_DOCUMENT_TOKEN_TO_BE_REPLACED

You probably need to prepare for the holidays you and your family celebrate. Or maybe start work on some year-end accounting. Accordingly, I want … END_OF_DOCUMENT_TOKEN_TO_BE_REPLACED