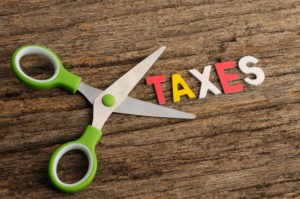 Last week, I blogged about how to pay zero federal income taxes on a $100,000 income. But that’s not very relevant to most readers. First, the U.S. average household income is about $56,500 so way less than $100,000. Second, paying zero  income taxes on a six figure income requires special circumstances and goofy tactics.

Note: A $100,000 income puts a person around the 70th percentile according to the U.S. Census Bureau’s most recent Income and Poverty report.

Fortunately, you can pay zero federal income taxes on an average income pretty easily. Lots and lots of loopholes are available to let you do this. I’m going to describe a handful of these loopholes in this post. My list won’t identify every gambit. But it should give you an accurate idea of the sort of stuff that’s possible.

Let me, though, start by describing the taxpayer situation we’re considering. We’re talking about a married couple making $56,500. (The average household income in the country was $56,500 in 2015 according to the same Census Bureau source I just referenced.) For fun, I’m going to guess they have a couple of kids. The IRS statistics suggest they probably use a standard deduction. So that’s who we’re talking about.

So, how can this family drive its income tax burden to zero? Let’s look at the ways…

If this householder contributes $5,500 to an IRA, the tax bill drops to $200. That might be close enough to zero…

And then if the family wants to go all the way to zero, they could by contributing about $800 to the spouse’s IRA too.

Note that the drop stems both from the tax deduction the family receives by contributing to the IRA and from the retirement savings credit they receive.

And this tangential comment: Probably this household, if they start early, doesn’t need to save this much money. An 8% savings rate, per earlier modeling we’ve done (see here), probably works great. Especially if 3% or 4% of this 8% can come from an employer pension match.

But the point is, a retirement account will do the trick.

Another gambit: If the family sends either an adult or a child to college and pays tuition, that tuition payment will probably zero out the family’s income tax bill.

For example, if the family pays $6,000 a year (this happens to be the annual cost of my favorite online university, Western Governors ), the family not only pays zero income taxes, it will probably receive a refund if the college student qualifies for the American Opportunity Credit.

Note: Educational investments made by middle-class taxpayers get particularly favorable treatment by the federal and by some state tax laws. Which can be a double benefit: The taxpayer saves taxes, and the taxpayer gets a college education and all the benefits that can provide.

Just to mention this, if the family adds another person to the household, that additional dependent will zero out the family’s income tax bill and probably generate a small refund.

I’m not suggesting you have another child to save taxes… only pointing out another scenario where the average household pays zero income taxes.

Another gambit also commonly zeros out an average household’s tax bill: Getting a mortgage. But let me explain how this works.

You get to choose whether you use the standard deduction on your tax return to shelter income or the total of all the expenditures (mortgage interest, property taxes and a bunch of other less significant items) you can count as itemized deductions.

Now, your mortgage interest and property taxes are the big itemized deductions you get as mentioned. But you will also get a charitable giving deduction. (Even if you’re not a big giver, this deduction usually creates tax savings simply for the stuff that you give away—like clothes and toys kids have grown out of.) Further, state income or state sales taxes become another itemized deduction.

First, if you’re a typical, average middle-class taxpayer, you can also use any of the gambits I described in last week’s blog post as working for a person making $100,000 a year.

Third, unfortunately, you will still have other substantial federal taxes to pay. Social Security and Medicare, for example, will run about $4,000 annually for the average family. (Remember you get something for these taxes: retirement benefits and retirement health insurance.)