You are here: Home / investment / Rate of Return of Everything Line Charts 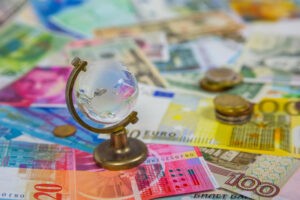 About a year and a half ago, a group of researchers published a study that summarized rates of return on equities, housing and bonds for 16 countries over roughly the last 150 years.

Then, a few weeks ago, the authors graciously provided the data from their study. I’ve already blogged about this wonderful resource once. (That blog post appears here: Lessons from the Rate of Return of Everything.)

But I wanted to revisit the study’s data and conclusions. And this time, to do something a little different, I’m going to plot some of the study data in line charts.

Note: The actual study appears here. (The full citation is Òscar Jordà, Katharina Knoll, Dmitry Kuvshinov, Moritz Schularick, and Alan M. Taylor. 2019. “The Rate of Return on Everything, 1870–2015.” Quarterly Journal of Economics. Forthcoming.) The data you and I can download from this web page under a Creative Commons Attribution-NonCommercial-ShareAlike 4.0 International License.

Let me share a handful of upfront comments to give you some background, however.

First, each line chart shows how 1000 local currency units–dollars, francs, marks and so on–invested in a particular country’s equities, houses and bonds grow over time.

The line charts plot real values in the local currency. (I adjusted for local currency inflation, in other words.) And I use logarithmic scaling to make the graphs comparable and to let you focus on the rate of change.

Note: Portugal’s stock market essentially melted down in the 1970s due to civil unrest, dropping in value by roughly 50% annually five straight years in a row.

I mention this because the average returns shown in the study’s tables represent arithmetic averages. (An arithmetic average return formula looks at a -20% return in year one and then a +25% return in year two and says the average equals 2.5% per year. The actual calculation goes like this: (-20%+25%/2) equals 2.5%.) They do this, by the way, for a good reason we don’t need to get into here…

And now let’s begin… (I’ll work through the charts in alphabetical order.) 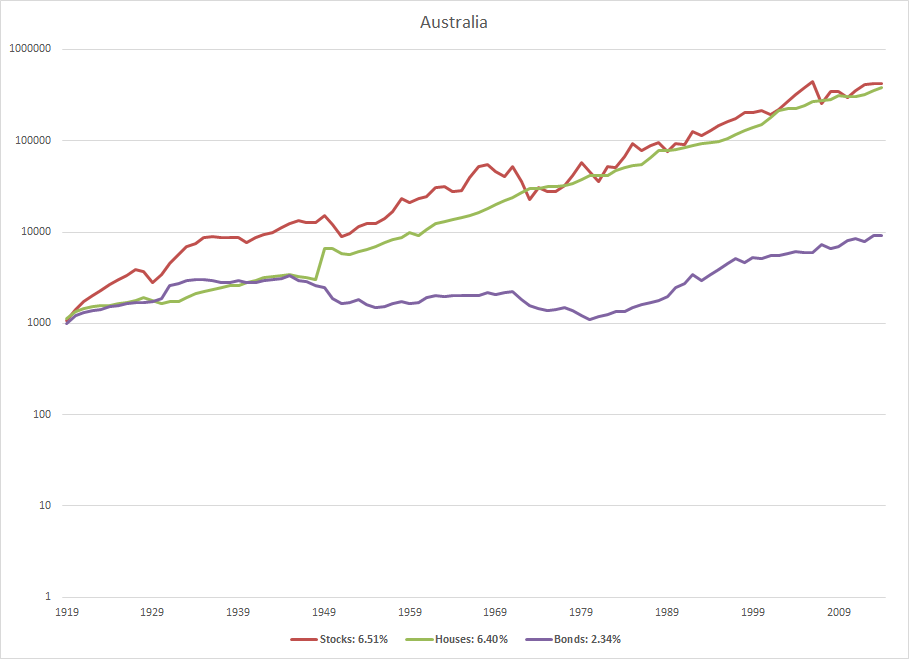 The next line chart shows stock, housing and bond returns for Belgium. And it spotlights something that appears again and again in the data. Real returns on housing investments often beat real returns on stocks. (The legibility of the legend isn’t great–sorry–but it shows Belgium equities earned roughly 4.1% over last century versus housing which earned roughly 6.4% over the same time frame.) 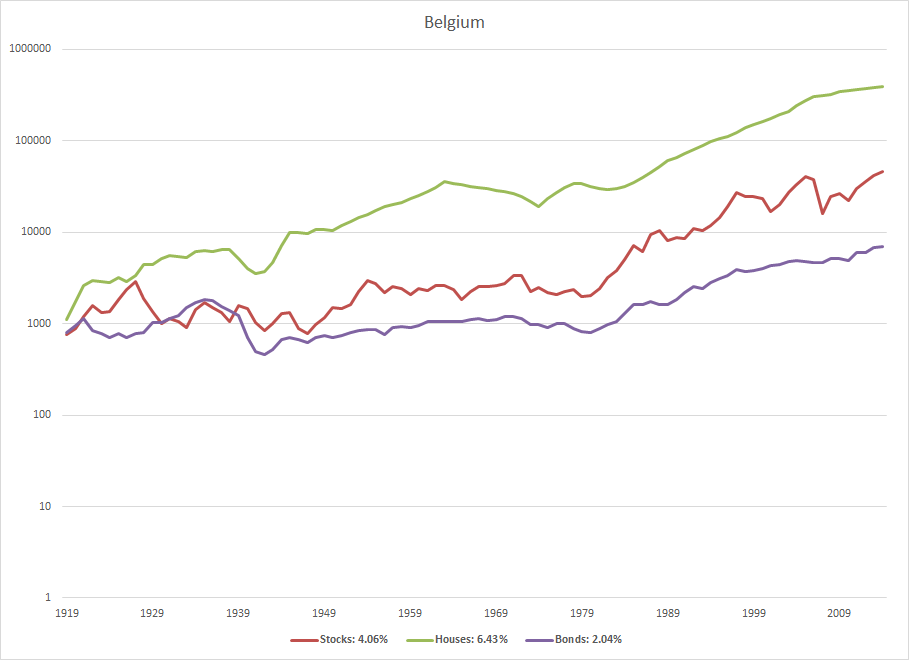 Denmark’s rates of return line chart shows again the superior return delivered by housing as compared to stocks. And one interesting note… See how a small difference in the real return (6.27% for stocks versus 7.28% for housing) snowballs over time? Wow.

One thing to mention here, however: As noted in the original study, the researchers weren’t able to include the impact of property taxes in the return calculations. (They suggest that omission may reduce the real return by about 1% annually.) For Denmark, that sort of adjustment equalizes returns obviously. 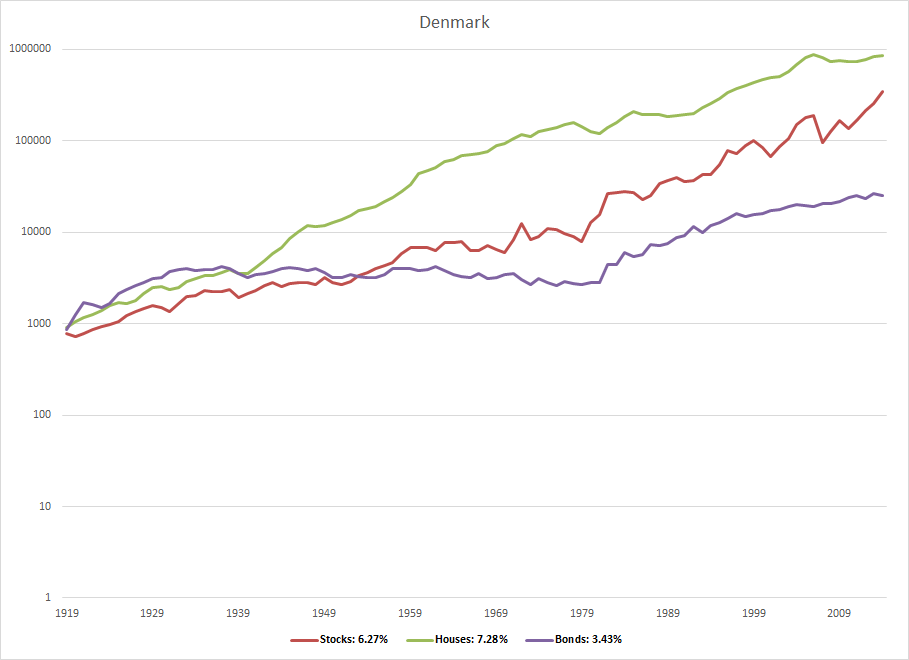 The Finland line chart shows again a superior return delivered by housing: 6.7% roughly for stocks versus 8.6% roughly for housing. But you wonder about the interplay of Finland’s small size (roughly 5.5 million people) and then the giant global successes of Nokia. 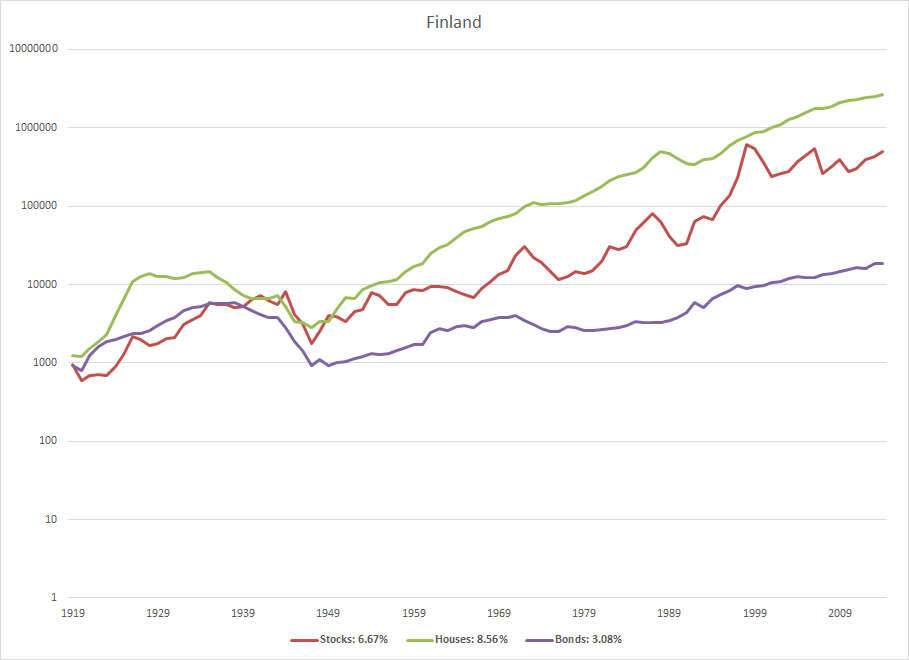 The France line chart tells an important story. You can lose money in the stock market–even if you invest for a long, long time. Over 96 years, the real return on French equities equals -.18% annually. That’s minus .18%. Roughly, a 2/10ths of a percent negative return, annually, for nearly a century. 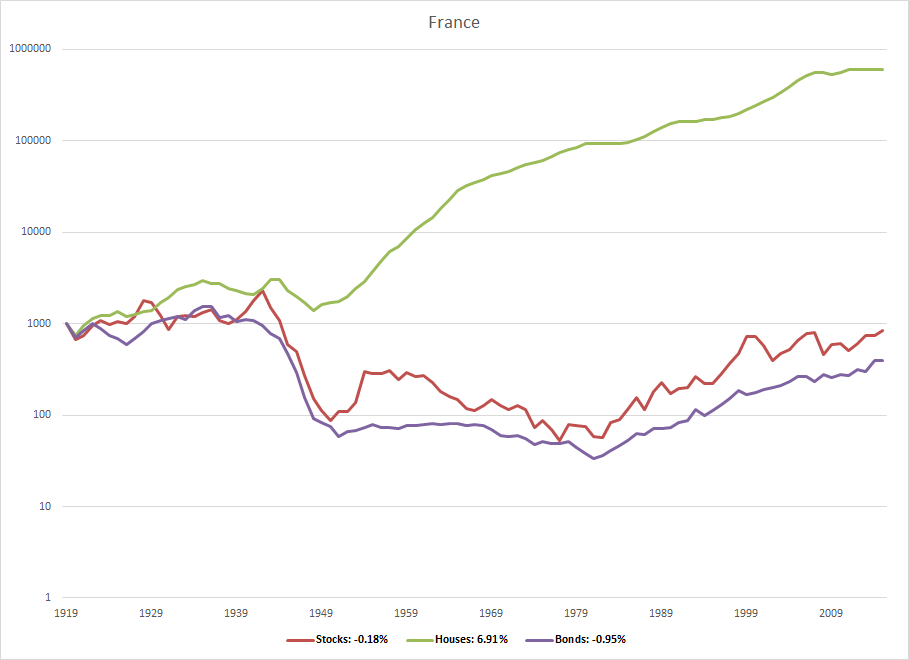 The Germany line chart tells two important if predictable stories. First, hyperinflation, like that experienced by the Weimar Republic after World War I, destroys bond returns. The average annual real geometric return on German bonds equals -21.08% (minus 21%) annually over roughly the last century. (Wikipedia has a good write-up here.)

Note: If this sounds impossible, note that if 1000 German marks in 1919 lose 99.999% of their value through inflation, thereby dropping in value to a penny, even a hundred years of solid bond interest doesn’t begin to rebuild the balance. 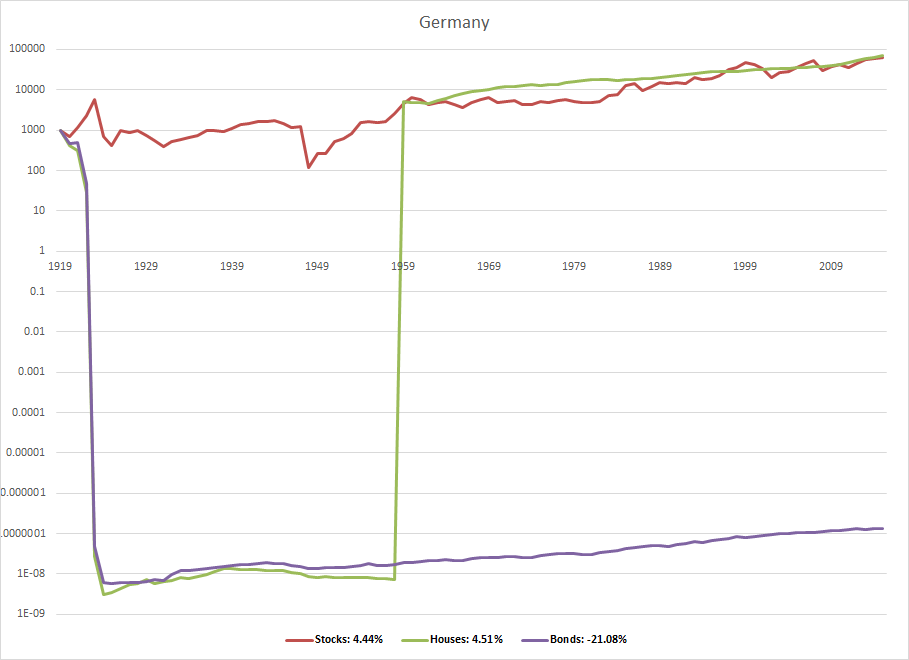 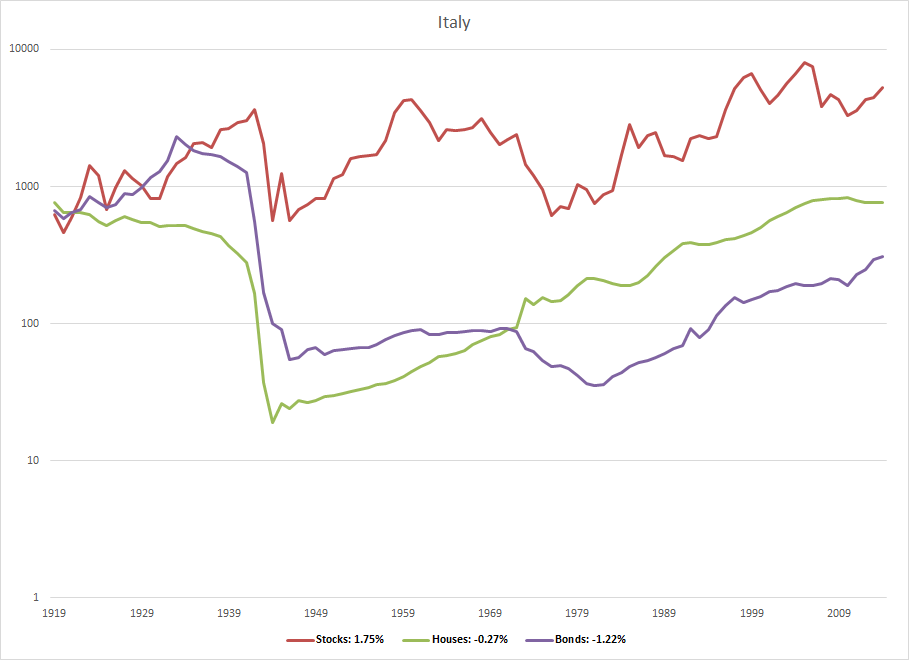 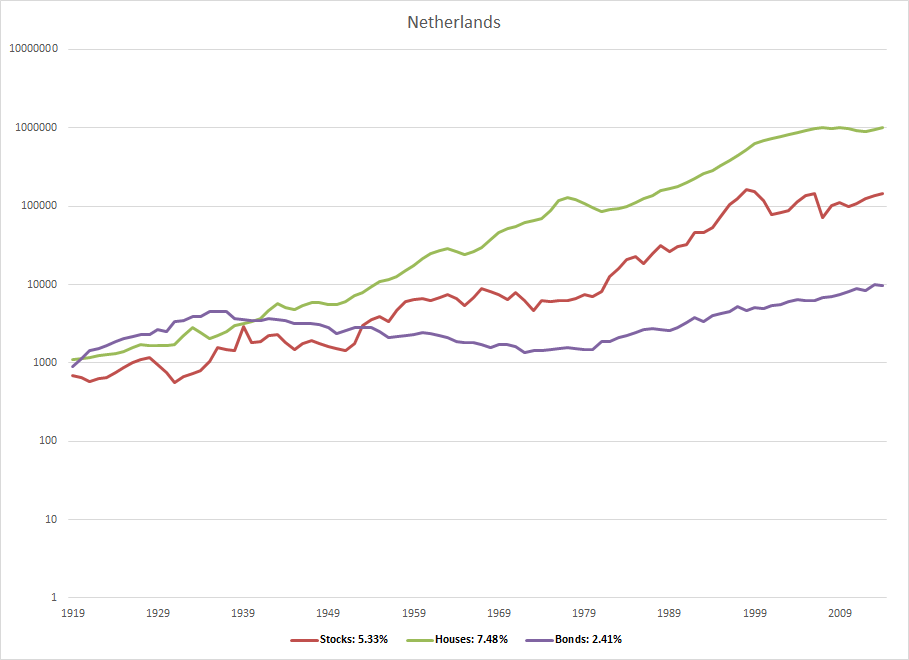 Norway’s rates of return history counts as yet another example of housing beating stocks. But one wonders how to or whether to factor in the effect of the country’s vast oil wealth. 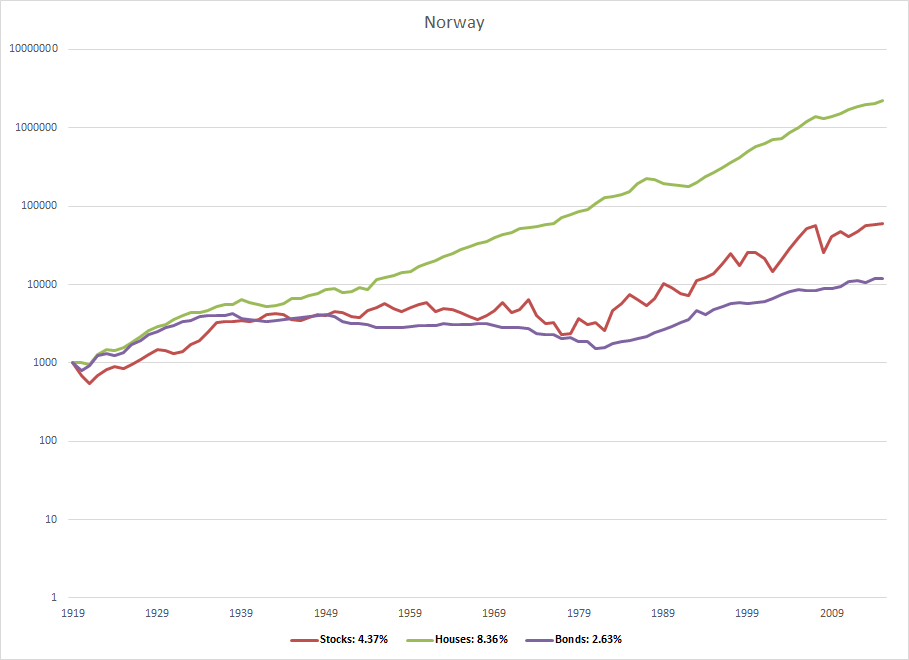 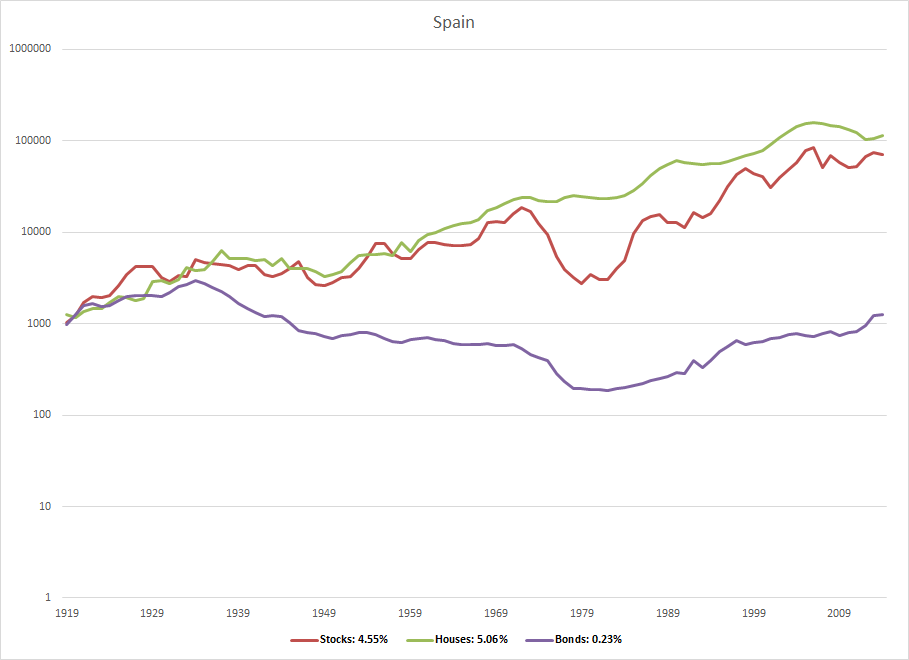 Sweden again showcases the higher returns delivered by housing–9.21% for housing versus 7.43% for stocks–and then the uneven returns of stocks. 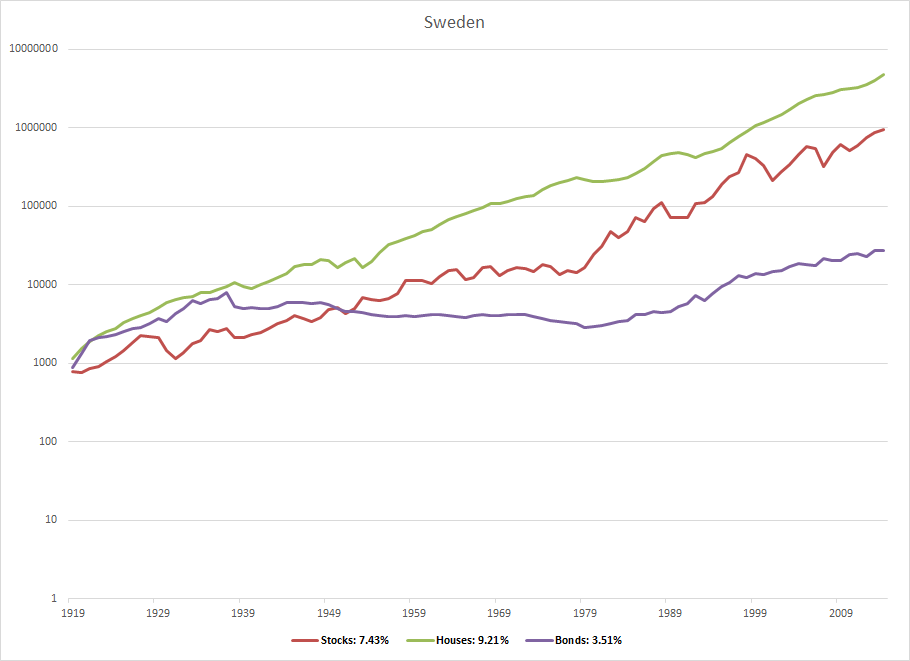 For Switzerland, stocks slightly beat housing investments: 5.98% versus 5.92%. But the jagged red line in the chart really highlights the greater volatility of stocks. 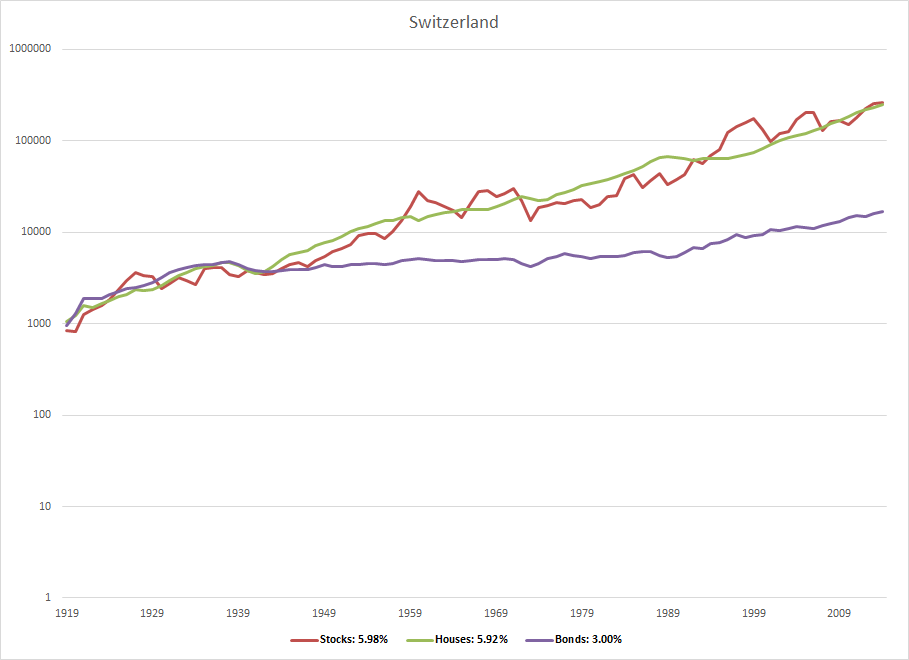 The United Kingdom’s line chart shows stocks handily beating housing over a century–and also substantial volatility in returns. (That’s the jaggedness of the red line…) The other thing to note if you’re a retiree or someday plan to be: The UK stock market also tanked in the early 1970s meaning that its stocks would not have helped you diversify away the worst case retirement scenario in living memory: The cohort who retired in 1966. (Ben Carlson did a good write-up here on this bit of financial history.) 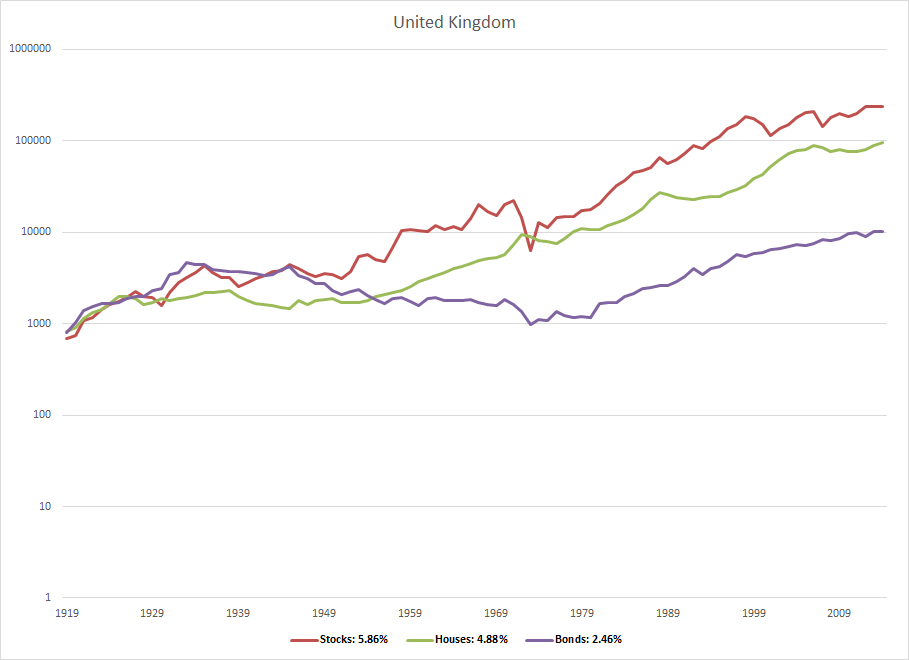 And the last line chart of returns: The United States’… For the US, stocks beat housing. But in line with the study’s observations, stocks give investors a roller-coaster ride of returns. Also, in relationship to the 1966 scenario in the US (which happens to be worst scenario for retired US investors over the last century or so), housing would have shored up an investor’s portfolio. Apparently. 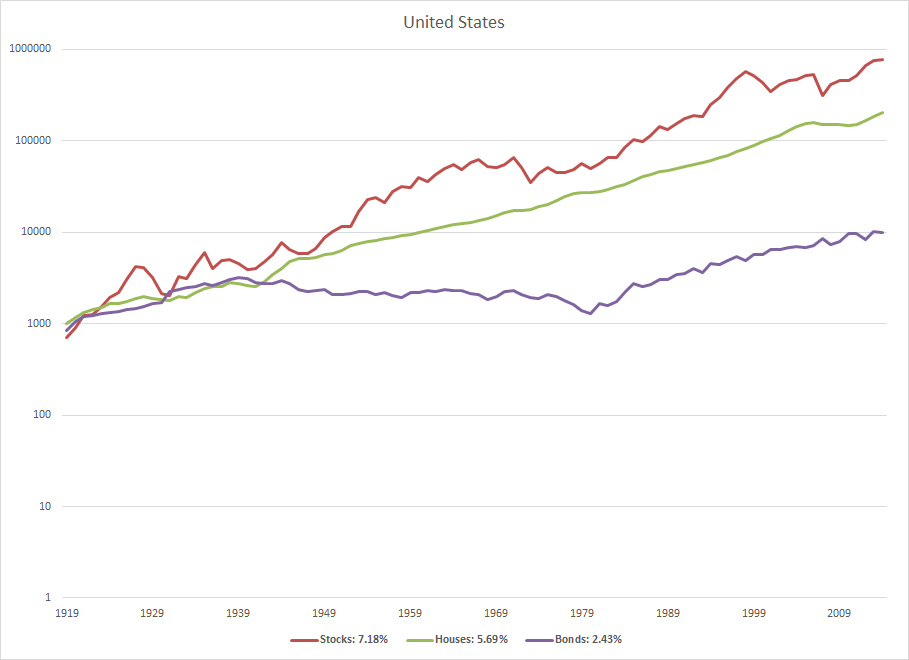 I’m not going to spend more space here talking more about the study. As noted, we’ve got that earlier blog post that summarizes my sense of the actionable insights. But this obvious comment: Stocks (and real estate investments too) burden investors with additional risks. Also, investing in a single country has often been a very risky practice. Investors need to stay sober and alert.

And this final comment: The very best place to dig into the details of the study is the study itself!