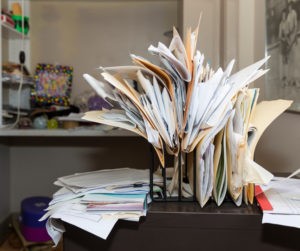 Right before New Year’s Eve, a tax court vaporized an S corporation and its shareholder due to what might only amount to poor S corporation paperwork.

You want to know about this court case if you’re running an S corporation because what happened to this poor shareholder could also happen to you.

You can read the entire court case here if you like. But in a nutshell, Ryan Fleischer incorporated his investment advisory business as “Fleischer Wealth Plan” and elected Subchapter S corporation status.

He then began treating his business revenues and expenses as corporate activity and reported that income and expense on a corporate tax return.

Unfortunately, however, he didn’t update or modify his customer contracts so his new S corporation was the entity getting paid. As a result, it was really Ryan Fleischer, the human being, who got paid.

Fleischer’s CPA dealt with this situation in two of the three years in question by adding a Schedule C form to Fleischer’s 1040 tax return where the money customers paid him showed as revenue and then as an expense. The S corporation then reported the revenue on its tax return as well as the business’s actual operating expenses.

This tax accounting gambit is common and even recommended by the IRS for situations where some customer or client sends out a 1099 to the wrong person  (see nominee rules here).

But Mr. Fleischer’s tax returns were audited. And that’s when things got messy…

The IRS used the poor paperwork to in effect shut down the S corporation tax savings. And when Fleischer and the IRS went to tax court to argue whether IRS was correct, the judge agreed with the IRS.

If you’re interested in the details, read the court case. It’s not that complicated.

But for S corporations in general, you want to take three lessons away from this court case. Because very possibly, better paperwork would have saved Mr. Fleischer’s S corporation.

The big key lesson: If your business contracts with a customer, the contract should name your S corporation as the party getting paid.

Note: The problem for Mr. Fleischer started, probably, with the IRS seeing 1099s that reported income getting paid personally to him. By the way, for the first year in question, Mr. Fleischer or his accountant apparently did not account for the 1099s he received personally on his 1040 tax return and simply reported that income on his 1120S S corporation tax return. I will guess this mismatch triggered the audit which lead to the tax court case.

A second lesson: Your customers need to actually pay your S corporation. They shouldn’t pay you.

By the way, the tax court case doesn’t say this. I’m reading between the lines here. But if you generalize the issue at hand with Fleischer’s S corporation, it seems like anything you do to make it look like the income didn’t go to the S corporation but instead went to the shareholder is risky.

A old but related tax court case about a law firm practicing tax law, Empey, makes this same point and also highlights the importance of consistently telling the same story about the corporation being the business in all sorts of ways. Here’s a relevant quote from that case:

The name of the Corporation appears on the letterhead of the stationery used by its officers and lawyer employees. The Corporation’s name appears on its office doors, in the building directory, and in its listing in the Martindale-Hubbell Law Directory. It maintains a corporate bank account. In courts where so authorized, it signs pleadings in its corporate name. It has obtained an employer identification number from the Internal Revenue Service; has regularly filed employer-employee tax returns and paid the tax thereon; has made all corporate reports required by state or federal laws; and has filed corporate tax returns, both state and federal…

By the way, the tax attorneys involved in the Empey case prevailed when the IRS challenged whether they were really a corporation.

A possible third lesson is this: Mr Fleischer’s salary amounts were probably too low. He paid himself around $35,000 a year… less than the average S corporation salary.

And for the years in question, he was making quite a bit more than the typical S corporation. Between $100,000 and $150,000 a year in addition to his salary…

I have to wonder if the modest salaries were a factor in this S corporation unraveling in the end. (Did the mismatched 1099s trigger the audit and then the low salary contribute to a big fight with the IRS?)

If Mr. Fleischer’s salary amounts had been twice as large, he would still have saved lots of taxes with his S corporation. But quite possibly, those higher salaries would have satisfied the IRS agent. (A doubling of his salary would have meant his salary matched the average S corporation salary data we tease out of IRS statistics at our S Corporations Explained website.)

S Corporation Partnerships Let You Break All the Rules

Concerned about IRS short-term rental audits? Hey, you're not crazy to worry if you own a vacation rental. Short-term rentals often shelter lots of … END_OF_DOCUMENT_TOKEN_TO_BE_REPLACED

Long ago, there was no tax code that differentiated ordinary income from passive income or ordinary losses from passive losses. Life was good for … END_OF_DOCUMENT_TOKEN_TO_BE_REPLACED