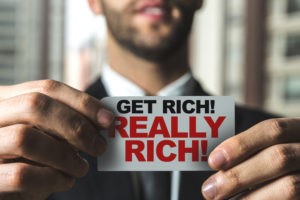 This week, I want to talk about spotting investment scams.

Okay, sure, a funny topic for a CPA to broach. But every year, our CPA firm sees a handful of situations where some poor taxpayer has been bamboozled by a criminal using an investment scam.

So maybe I can offer some tips for spotting these scams ahead of time—and before you become a victim.

Just so we all start on the same page, though, let’s make sure we work from the same definition. By “investment scam,” I mean something like a Ponzi scheme or a con or an outright theft dressed up to look like an investment. I don’t mean dumb investments. Or risky investments that go south.

In an investment scam, some innocent gets victimized by a criminal who uses a fake investment to steal. That’s the scam. That’s what we’re going to talk about you avoiding.

With that in mind, here are five tips…

A first easy tip: You need to operate as if these cons are real. Because they are.

Be alert, therefore, to the reality that within your community, you probably have people who use investment scams to steal.

In your community, you know you have burglars. You know people shoplift. You may read about armed robberies. You know all this.

And so you also want to know, acknowledge really, that your community, your social network, sadly includes thieves who use investment scams to steal.

Most discouragingly, these thieves are probably the smartest and the most financially destructive property crime criminals you’ll encounter. The average shoplift theft equals less than $40 supposedly per the StatisticBrain website. The average burglary nets around $2,100 while the average robbery nets about $7,600 per the FBI. And yet many of the investment scams result in individuals losing tens or even hundreds of thousands of dollars.

Traditional asset class investments include stocks and bonds you buy through a company like Charles Schwab. And they include index funds you buy from Vanguard and Fidelity. This stuff is boring. But this stuff is also way, way harder to use as a part of a theft or scam.

Alternative asset class investments include things like private equity investments (where maybe you buy into a small business), real assets (like real estate or oil and gas partnerships), and absolute return investments (like hedge funds). These investment options, which are often informal and loosely regulated, are great tools to use if someone wants to steal from people using investment scams.

No kidding, all of the investment scams we’ve seen over the last decade or so (and we see a few every year) use alternative asset class investments.

Note: The FBI provides a great discussion of the types of investment scams common in a lengthy article here. If you decide to invest in an alternative asset class anyway, at least read through the FBI’s list of investment scam flavors and make sure that what you’re tempted by doesn’t sound like a common fraud.

Another quick tip that’s easy to understand if tricky to apply? Suspect any investment that generates a remarkable return. Especially if the return goes on and on.

These investments simply don’t exist in real life. No, no, I hear you. It’d be great if they did. And, yes, you’re right: Sometimes people do play and win the investment lottery.

But long-running, high-returning investments are not available to individual investors. These sorts of investments aren’t really even available to big sophisticated institutional investors either, for that matter. Which means someone who tries to lure you into an astonishing good investment is possibly either a dummy or a criminal.

Note: A while back some joker in town was selling prospective investors on an investment—basically guaranteed—that delivered a 6% per month return. That meant you doubled your money every year. The deal was so good, so alluring, people only wanted to believe.

Spotting Investment Scams Tip #4: Pay Your CPA or Attorney to Look at the Deal

Can I offer you another suggestion? If you do decide to get into some exotic investment, in spite of my comments, please have your CPA or attorney look at the deal. In other words, pay him or her for an hour or two to critically look at the investment.

I guarantee you a veteran CPA or attorney has seen a bunch of these once he or she has been practicing for a couple of decades. And that experience often allows the CPA or attorney to pretty quickly spot the scam. (Read Malcolm Gladwell’s book, “Blink,” for a discussion why this happens.)

A related note: Don’t assume that because some CPA or attorney is “in” the deal that that’s validation the deal is good. What you want is for someone who isn’t being tempted by the investment opportunity and its intoxicating returns to sniff at the deal and see if it looks sketchy.

And this related thought… If you do get an outside opinion, ask your adviser to be brutally direct and absolutely blunt. Tell your adviser the he or she has not only your permission but your encouragement to wave you off if the deal stinks.

Note: I alerted two clients this last year to fishy deals. Both, we learned later, turned out to be total cons.

Can I share something odd as my last tip?

The State of Michigan resource mentioned earlier alludes to something we also commonly see. Often, one sees really smart people get ripped off in these investment scams. People with doctoral degrees or law degrees or MBAs in finance. Or people with hardcore degrees from world-class universities.

Maybe that’s partly because really smart people can end up with the sort of money that tempts a criminal.

Superficially, why wouldn’t they get a nice bump over and above what the average person gets? That’s what they maybe experience in other areas of their life and their financial affairs.

But maybe that mindset sets them up for failure? Maybe it sets them up as the perfect mark for a criminal running an investment scam?