You are here: Home / Bookkeeping / Partial Dispositions and the New Tangible Property Regulations 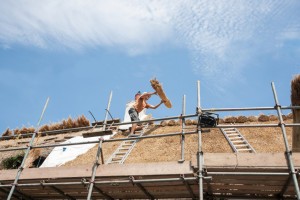 But in spite of this understandable frustration and confusion, the new regulations provide one noteworthy loophole that both tax accountants and taxpayers need and will want to understand: the partial disposition rules.

Partial Dispositions in a Nutshell

Let me explain, just to bring everybody up to speed, what a partial disposition is and how it works.

Say you have a real estate investment—a small office building—and you need to replace the roof.

But there was a subtle weirdness embedded in this convention: Indirectly, you would have also been depreciating the costs of the old roof. The one that was, with the new roof on your building, mostly in a landfill somewhere.

The new regulations give you the option to handle this differently. The new rules let you write-off or dispose of the undepreciated old roof.

Let me provide a simple example of how this might work. Say the small office building we’re talking about here cost $390,000. That would mean that after exactly ten years of depreciation, the taxpayer would have depreciated $100,000 of this amount because $390,000 divided by 39 years equals $10,000 a year.

If the roof needs to be replaced at that point, what the taxpayer can do is break the $390,000 of original cost and the $100,000 of accumulated depreciation into two smaller “sub-assets”: the roof and the building without the roof. And then the taxpayer can write off the remaining undepreciated portion of the roof.

To keep the math very simple, suppose that the roof represents $39,000 of the original $390,000 or ten percent. That would mean that ten percent of the accumulated depreciation amounts to $10,000.

And in this case, partial disposition treatment means the taxpayer shows on his or her tax return an asset that originally cost $39,000 and which had accumulated $10,000 of depreciation being disposed of for a $29,000 loss.

Three Details You Want to Know

You should know three more things about this, too. First, the regulations say you can use any reasonable method to break down the original asset cost into smaller subasset costs, including a cost study and a pro rata allocation.

Second, the way you do this accounting on the tax return that shows the partial disposition is to “break apart” the original asset into two new smaller subassets or component assets.

Using the example described here, the previous year’s tax return might show a $390,000 nonresidential property with $100,000 of accumulated depreciation.

A third subtle but important point: Of course a taxpayer may benefit from accelerating deductions and writing off the remaining cost of the old roof. That’s good, sure. But the partial disposition also provides another benefit. Partial disposition treatment removes accumulated depreciation from the fixed assets schedule.

Why is this important? Often accumulated depreciation gets recaptured when an asset is sold and then that recapture means some of the proceeds from a sale get taxed at higher marginal tax rates.

So here’s a weird thing: Partial disposition treatment has existed for a while.

You were supposed to use partial disposition treatment if you experienced a casualty event where, for example, a windstorm ripped the roof off and then you had to replace the roof.

Other situations existed, too, where you might conceivably use partial disposition treatment.

But with the new regulations, you have two other new situations where you may want to use partial disposition accounting.

Here’s the first situation—and it’s one I’ve already alluded to in earlier paragraphs: You can now elect to treat the replacement of something like an old roof as a partial disposition in the year the roof replacement occurs.

You don’t have to do this. But you can.

How do you do this? By breaking out the old roof’s original cost and accumulated depreciation in the matter I described earlier—and then showing the asset disposition on the current year’s tax return.

Obviously, for any meaningful dollar amount, tax accountants and taxpayers want to do this. Sure, it’s a little bit of fiddling. But the partial disposition election saves money immediately and also down the road.

The new regulations also give you the opportunity to catch up by retroactively accounting for any past partial dispositions.

In other words, a current partial disposition lets you write off an old roof you replaced in 2014 on the 2014 tax return.

But a late partial disposition lets you write off an old roof you replaced in, say, 2012, on the 2014 tax return.

By the way, the Form 3115 reports on any accounting method change and then flags the catchup amount as a Sec. 481 adjustment. If the $390,000 office building example described earlier was reporting a late partial disposition, the $29,000 old roof write-off amount would be the Sec. 481 adjustment.

Note: That $29,000 amount given above means in this example that the taxpayer has changed exactly 10 years of depreciation on the old roof.

Second, a late partial disposition triggered by the new tangible property regulations needs to be made on the 2014 tax return (you can’t do these in future).

And just to make this clear, the permission to cut corners on filing Form 3115s that the IRS gave by issuing Revenue Procedure 2015-20 doesn’t matter.

Which maybe means we should talk a little bit about this revenue procedure.

On February 13, 2015, the IRS issued a revenue procedure (see here for my discussion of this: Revenue Procedure 2015-20 a Face Punch for Tax Accountants) that says small businesses and small real estate investors don’t need to file 3115 forms to report on accounting method changes triggered by the new regulations.

Then, because you are including a form 3115 for the late partial disposition, you are now out from under the “protection” of the revenue procedure and need to file the other 3115 forms the new regulations require.

I’m providing a sample, filled-in Form 3115 for a late partial disposition accounting method change. The sample form is filled out to show the partial disposition of the old roof on the fictional small office building I use for the example in the earlier paragraphs (click here to download that.)

If you decide to do a late partial disposition and also need help preparing the other 3115 forms required, you may also interested in our ebook on the subject. 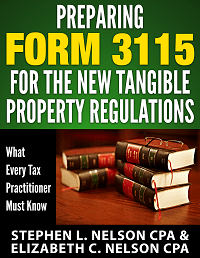 This short (70pp) downloadable e-book explains how the new regulations change the way small taxpayers need to do their accounting for tangible property deductions, outlines an approach to complying with new regulations with a minimum amount of fuss and handwringing, and supplies a sample accounting policy which should help a small taxpayer stay in compliance in the future.

Of more interest to people who need to file 3115s because they’ll make a late partial disposition on their 2014 tax return, however, the e-book includes three sample, completed 3115 forms for the most common other accounting method change requests small taxpayers will need to make … For $100, you can purchase and immediately download this e-book. Click the button here to make your purchase:

And an important note: We’re providing a money-back guarantee… if you don’t find our e-book saves you several hours of time, just email us and ask for a refund.

Concerned about IRS short-term rental audits? Hey, you're not crazy to worry if you own a vacation rental. Short-term rentals often shelter lots of … END_OF_DOCUMENT_TOKEN_TO_BE_REPLACED

Long ago, there was no tax code that differentiated ordinary income from passive income or ordinary losses from passive losses. Life was good for … END_OF_DOCUMENT_TOKEN_TO_BE_REPLACED