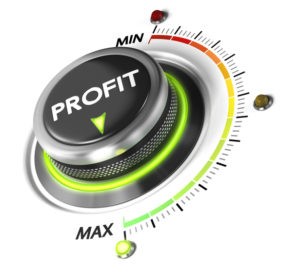 I’ve been fixated on the issue of small CPA firm profitability for a few months now—ever since I took the time to really dig into the latest Management of an Accounting Practice (MAP) Survey published by the American Institute of Certified Public Accountants (AICPA).

Reflecting this fixation, this week I’m blogging on the topic and covering a couple of angles.

First, and invoking the fair use doctrine in copyright law, I want to review the MAP survey, pointing out a problem I see in the results.

Every few years, the AICPA’s Private Company Practice Section—a group of small CPA firms within the AICPA—surveys its members. The AICPA and the Texas Society of CPAs later publish the survey results as the MAP survey and this publication provides tons of interesting statistical information about the characteristics of small CPA firms: their financial performance, how they staff, what technologies they use, and so forth.

The survey reports, for example, the revenues and profits of single owner firms at the 25th, 50th and 75% percentiles as shown in the table below:

Lots of people—including government agencies like the Internal Revenue Service and CPA firm owners—use this data to benchmark. And on the face of it, that usage seems reasonable. Except for one rather awkward possibility.

See that first line of the table? The one that describes the 25th percentile firm as generating slightly less than $200,000 in revenue and as making about $77,000 in profits?

In the AICPA survey, 25% of survey participants generate revenue of less than roughly $200,000.

You have to back into this conclusion by looking at employee counts for firms in the smallest MAP survey category and the smallest Census Bureau category, by the way. (Here’s a link to a blog post I did last week about how to do this: Benchmarking Small Business Revenues and Profits .)

You see the problem, right? What the MAP survey describes as the bottom 25% of the industry probably amounts to more like 70% of the industry. And then of course if the survey misstates the 25th percentile, those values shown for the 50th and for the 75th percentiles are wrong, too.

A quick stipulation: I am not saying this situation reflects some mistake made by the AICPA. Absolutely not. They run a survey of members and low participation by the smallest firms isn’t something they can control.

However, what you realize after you think about this for a minute is this: Users need to recognize and adjust for the undersampling.

When you adjust, you get a far different picture of what small firm profitability looks like.

The table that follows gives my best guess of what small CPA firm profitability actually looks like.

The table above, by the way, says the chunk of firms that the MAP survey presents as 25% of the industry actually represent approximately 68% of the industry since that’s what the Census Bureau data suggest. (This is the second line of data.)

And then what the MAP survey describes as the 50th percentile actually, to me, looks to be the mid-point between that 68th percentile and the 93rd percentile, or roughly the 81st percentile.

For the record, my math here is all a little roughshod. Please consider my calculation results very approximate.

And that’s enough backstory and review of a problem in the MAP survey data. Let’s talk about why all this stuff even matters both to small CPA firm owners… and then, really, to other small business owners too.

I spot three interesting ideas baked into this situation.

A first point, which sort of surprises me but which also makes total sense once I mull things over a bit: The combination of AICPA and Census Bureau data suggests that the average single owner CPA firm generates no true entrepreneurial profit.

If I start poking around at the financial characteristics of those firms with revenues less than that $200,000-ish threshold, for example, it looks to me as if the median single owner CPA firm generates maybe $160,000 in revenue and maybe $65,000 to $80,000 in profits. (This is the first line of data.) These values mesh with what the Census Bureau shows, with what the MAP survey says about single owner firms with less than $200,000 in revenue and with other secondary data sources.

In short, the typical single owner CPA firm produces a bottom-line net income roughly equal to the salary and fringe benefits enjoyed by an experienced senior accountant. And then remember of course that half of the single-owner firms are actually making less than whatever that median value equals.

And then this tangential thought—which is really a guess on my part. I doubt that small CPA firms are unique regarding their profitability. Surely in many small business categories, the median profit roughly resembles the salary and benefits an equivalent job pays.

Here’s a second interesting thing that shows up in data.

While on average, single owner CPA firms don’t earn an entrepreneurial profit, if you look at the 81st percentile or 93rd percentile of the combined Census Bureau and AICPA MAP data, the numbers look great.

If you’re a single owner CPA firm, mull over that wide variability in revenues and profits.

Note: If you are a member of the AICPA’s Private Company Practice Section, you just have to dig into the details of those top 5% or 10% single owner CPA firms because in those top tiers, wide variability also exists. And many of those top performing single owner CPA firms are doing really well. (By the way, if you run a CPA firm and are not a member of the Private Company Practice Section, oh my gosh, you need to join… Membership in the PCPS costs $35 for a single CPA firm, which represents an unbelievable bargain.)

Can I also use this wide variability in small CPA firm profitability to make a guess about small business profitability in general? Surely this same wide variability shows up in other industries. In other words, small CPA firms cannot possibly be the only small business category where the average person earns an okay living, but top performers put big profit numbers on the scoreboard.

The Terrible Irony in All This

Within the profession, numerous resources exist that tell single owner CPA firms what they need to do and how they need to operate in order to enjoy better profitability.

And lots of other good resources exist, too. For single owner CPA firms wrestling with small CPA firm profitability, for example, I’d recommend reading anything written by Edward Mendlowitz (especially his Practice Doctor blog), by Marc Rosenberg (but especially the Rosenberg Survey) and Ron Baker (especially his book The Firm of the Future).

Tips for Effective Marketing of Your CPA Firm