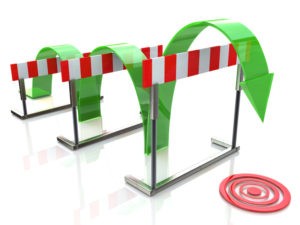 I encountered some pretty interesting data recently. The lifetime earnings of the top one percent, top five percent and top ten percent.

A surprise appears here. And then, more relevant to the purpose of this blog, the lifetime earnings data provides actionable insights to small business owners.

But let’s look at the data. And then we can discuss a handful of issues and the insights.

The table below reports average annual earnings between ages 25 and 55 by percentile for people who started work in 1983. These income measures don’t include investment income. The numbers do adjust for inflation through 2013. But on the whole, for reasons explained in the actual paper the numbers come from, they provide a good estimate of what lifetime average incomes look like.

Note: The table data comes from a National Bureau of Economic Research working paper, “Lifetime Incomes in the United States Over Six Decades,“ written by Fatih Guvenen, Greg Kaplan, Jae Song and Justin Weidner. (The 2013 data appears in the last row of Table A.1 on page 50.)

Skip This If You’re Comfortable with the Statistics

Just to make sure we’re all on the same page, the data says that on average someone who worked between 1983 and 2013 earned about $38,000 a year. Half the people who worked averaged less than this amount. Half averaged more.

Note: Remember the income numbers all get adjusted for inflation through 2013. So, we’re talking the same sized dollars.

And then to make sense of the high-income earners, to hit the 90th percentile, someone needed to average about $95,000 a year over the years they worked.

That 99th percentile value needs to be interpreted a bit more carefully. If someone averaged $290,000 a year over thirty years of work, that person earned more than 99 percent of workers.

Can These “Lifetime Earnings Top One Percent” Numbers Be Right?

In any event, the big income numbers above seem wrong, don’t they? I mean, really wrong? Not in line with what you read in the news? Yeah, I agree.

The table that follows compares the National Bureau of Economic Research data for the 95th percentile to three other popular and often-reported values:

Note: You can grab a summary of the Federal Reserve Survey of Consumer Finances 2013 data here and an Excel spreadsheet with Economic Policy Institute 2013 numbers here.

So the question becomes, is something wrong with the low-ball number(s) from the National Bureau of Economic Research?

In any given year, a few people see their income spike up for the year. They maybe win a lottery, receive an inheritance or earn a big one-time bonus.

Other people enjoy a spike up that lasts a few years. This case might occur for a professional athlete. Or an entrepreneur or executive.

But then, usually, incomes move back toward the average.

That variability mostly explains the differences between, say, the National Bureau of Economic Research’s “average” numbers and the “point-in-time” numbers that come from the Federal Reserve’s Survey of Consumer Finances or that get reported by the Economic Policy Institute.

Quick Qualification about Apples and Oranges

Let me also add one other note about these numbers here. The numbers do report on slightly different things.

The National Bureau of Economic Research, for example, reports on the earnings of individuals.

The Federal Reserve’s survey reports on the incomes of families–which may include one earner or multiple earners and will include unearned income.

In any case, the big irrefutable point is people’s incomes show variability.

Further, this variability matters a lot for small business owners.

I think I spot at least three actionable insights in this reality. See if you agree…

We’ve talked in another blog post about research into how people’s income tends to move toward the average: Financial Planning for the Top One Percent. You might be interested in that discussion.

But the bottom line? Recognize that the higher incomes produced by small business ownership often zig and zag.

We all need to plan for that reality.

Actionable Insight #2: Slow and Steady May Win the Race

A second possible actionable insight: Consider the counter-intuitive possibility that a venture producing a steady 80th or 90th percentile income for decades may beat the flash-in-the-pan 99th percentile opportunity.

You earning, for example, $95,000 a year for decades doing something that balances well with the rest of your life?

You might be forgiven for thinking those “other guys” down the street—you know who I’m talking about—will end up in much better shape. At least financially.

But you know what? In the end, you may not only earn more than some big risk-taker. You may live a better life.

Note: If you are interested in learning more about lifetime earnings variability, the same National Bureau of Economic Research economists mentioned earlier have written another very interesting working paper: What Do Data on Millions of U.S. Workers Reveal about Life-Cycle Earnings Risk?)

Can I share one other actionable insight hinted at in the lifetime average earnings data?

See if you agree, but the data suggest to me people and pundits often overestimate what we can can save for retirement. The data may even help explain why most people don’t accumulate much retirement savings.

The third and final table (see below) builds on the lifetime earnings data presented in the first table. It estimates the maximum annual retirement savings each percentile might accumulate by investing in a balanced stocks and bonds portfolio that averages a 5% real return annually.

I assume the lowest percentile groups lack the ability to save. Further, I assume the folks saving 6% or 8% get half that money from an employer matching contribution. Only for the 99th percentile earner do I assume the person maximizes the “employee” part of something like a 401(k) plan and then also receives a 4% match.

We could get into a wrestling match about the assumptions in the table calculations.

Is the 5% real rate of return I used reasonable?

Can someone save for 30 years at the levels shown?

But here’s my hunch looking at the future values. Most folks should not plan on accumulating a giant nest egg for retirement.

All the talk about people needing or being able to save $1,000,000 for retirement for example? That sort of thinking, it seems to me, reflects unrealistic optimism about average earnings over a lifetime of work.

And getting to a $2 million retirement account balance? Oh my gosh. That surely counts as a low-probability outcome. You may need to (1) average top one percent earnings over three decades, (2) possess the discipline to save from the very start and then (3) be smart about your investing.

An average household with a couple of earners and $60,000 in annual income, for example, might logically hope to accumulate around a quarter million if they save for 30 years. (If they can save for 35 years, that amount grows to around $325,000.)

So, the actionable insight here? And framed for small business owners? Well, we should all do a way better job saving probably. We probably want to try to work longer. And then we also maybe want to plan for the reality that for almost everybody accumulating a gigantic nest egg is out of reach.

A couple of comments to close…

First, another similar “conflict” in the data appears when you look at wealth. On the one hand, for example, you have sources like the Federal Reserve’s Survey of Consumer Finances and publications from the Economic Policy Institute talking about very large net worth numbers for the top ten percent, top five percent and top one percent.

On the other hand, as we’ve discussed in other blog posts here, the IRS personal wealth statistics calculate much, much smaller numbers.

My own sense? The lifetime earnings data better matches the IRS personal wealth statistics. (Here’s one of the blog posts that talk about this: IRS Wealth Statistics Paint Fascinating Picture of the Top One Percent.)

And then a second comment: The lifetime earnings data, just to clarify, don’t undermine the idea that income inequality is increasing.

I discussed only the lifetime earnings of people who started work in 1983 above. But those studies referenced earlier look at a bunch of workers: people starting work in 1957, in 1958, in 1959 and so on. And the distribution of lifetime earnings, the income inequality in other words, has increased over time.

But this inequality stuff gets complicated once you dig into to the details. If you’re interested in the income inequality subject, the Our World in Data website article, Income Inequality, merits a close read.

Because they relate to the stuff discussed above, you might find the following blog posts interesting:

In the post Defending “Millionaire Next Door” Theory: What Stanley’s Critics Got Wrong, for example, we discussed longitudinal data about the impact of small business ownership on folks’ income and wealth.

And then, in the posts Caricaturing the One Percent, Money Mistakes of the Top One Percent , and Smart Wealth Strategies of the One Percent, we tease out insights about the wealthy from IRS tax data… insights that mesh well with the lifetime earnings data discussed here.